Nettle soup is the one to make

Sometimes an idea takes years to come to fruition. It has distinct stages such as scoffing, curiosity, acceptance then habit.

Take nettles. I used to think eating them was weird. But over the years the idea started to intrigue.

Last spring in Westward Ho! Chloë showed me a patch of nettles, and how to pick then with gloves, the freshest top leaves according to another blogger. Nettles were no longer alien as I cooked them in pasta and soup and found them delicious.

Perhaps precisely because nettles are wild and have not been cultivated or hybridised, they taste extra-vibrant and are highly-nutritious.

This spring, in Bristol, I saw nettles growing and thought “soup”. Then on Friday I overheard Leona, the owner of St Werburgh’s City Cafe talking about: “nettles and wild garlic soup.”

The next day Mike and I found ourselves on a magical walk beside the river Avon  in a mysterious part of the city. An abundance of nettles and wild garlic grew. 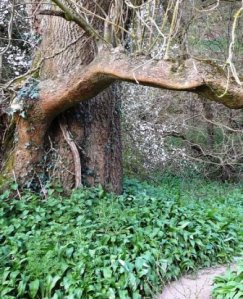 I picked up a discarded Tesco plastic bag (litter bugs have their place in the universe), sniffed it, found it clean and after borrowing a glove, started pinching off the fresh greens and filling the bag.

The next morning, I weighed the nettles and the wild garlic: 4 ounces.It didn’t seem enough – but it was.

I cut up a fat onion and gently fried it in 2 tablespoons of olive oil in a saucepan. I let it stew for an hour with the lid on, so the onion was soft and a bit caramelised. I was experimenting but you could fry the onion for much less time (like 10 minutes or so).

I added 900 mls of water. To thicken the soup I added 1 ounce of raw oats.

Then I snipped in the washed nettles and wild garlic, and let it simmer for about five minutes and turned off the saucepan. The soup carried on cooking with the lid on.

And it was delicious.

Can you get food more real than nettle soup? 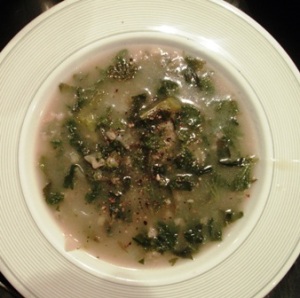 Proud to fly the Food Renegade flag, I contribute this blog on local and sustainable Nettle Soup to Fight Back Fridays to help overturn the domination of industrialised food!

23 responses to “Nettle soup is the one to make”