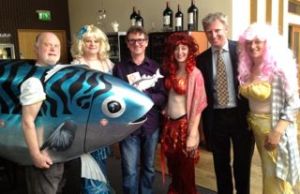 Ecocide is the destruction of nature, and the Ecocide Act seeks to bring those responsible for this destruction to account.

Drafted by barrister and campaigner, Polly Higgins, the Ecocide Act is not law. Not yet.

Writing post-Rio, Polly Higgins says the Ecocide Act is “a fully-worked piece of legislation which is ready to be implemented. All we need do is mobilise people to say that this must happen.”

In this spirit, the Bristol Law School organised the Marine Ecocide Trial in the presence of Polly Higgins (seated in pic below).

It was cool to meet Polly Higgins – we chatted (as one does!) about vested interests lobbying politicians. Polly Higgins said, worryingly, political lobbying is regulated by voluntary guidelines only, and only since last year.

Now to declare my vested interests: Charles Redfern, the MD and founder of Fish4Ever, the world’s first sustainable canned fish brand, is one of my clients. I only promote causes and companies I believe in. My involvement in the Marine Ecocide Trial was passionate and, mostly, voluntary (as is writing this blog).

Real barristers cross-examined expert witnesses in front of judge and jury as if the Ecocide Act were law.

Although not a “real” trial, the Marine Ecocide trial is nonetheless of huge relevance to future trials. As Bristol Law School principal lecturer in law and organiser, Benjamin Pontin, says:

“Documentation and arguments used at this trial will be used as legal precedents in future ecocide trials.”

The Bristol Law School is soon to launch a website dedicated to the Marine Ecocide Trial – watch this space.

In the Bristol trial, the UK Secretary of State for the Environment, Caroline Spelman, was charged for implementing policies that “are causing damage to and destruction of UK fishing ecosystems…”

The government pleaded not guilty and did not appear. Instead Graham Watson the Liberal Democrat Member of the European Parliament  appeared as a defence witness. So did Jeremy Percy, the chief executive of the Under Tens Fishermen’s Association.

The defence focused on showing that Caroline Spelman was not in control of UK fisheries policy, because it was devolved nations and the EU also being responsible.

The Walrus and the Carpenter

The words of Lewis Carroll’s poem, about the Walrus gobbling up the oysters, came to mind as I listened to the so-called concerns of the defence:

‘”I weep for you,” the Walrus said. “I deeply sympathise”.

With sobs and tears, he sorted out those of the largest size, holding his pocket handkerchief before his streaming eyes. “”

Jonathon Porritt appeared as an expert witness for the prosecution, swearing his oath on Gaia. He talked about the “systematic abuse of science” for political ends.

He also said that fish stocks don’t necessarily replenish once overfishing has been halted. In other words, overfishing can lead to extinction.

Another expert witness, was marine lawyer, Tom Appleby. When questioned by the prosecution about whether the UK government can legally hand out fish quotas, he said: “I do not believe Defra has this power to give out property rights.”

Dr Jean-Luc Solandt from the Marine Conservation Society gave the history of UK fishing and a factual but searing account of the damage done to the sea bed by scallop dredgers and beam trawlers.

Charles Redfern, MD and founder of Fish4Ever, the world’s first sustainable canned fish brand, was an expert witness for the prosecution.

He said that consumer awareness of the plight of the fish was a double-edged sword because now people care more about sustainability, it is possible for unauthenticated sustainability claims to be made.

Think how many times you see “Dolphin-friendly” on canned fish. Charles Redfern says you might as well label chocolate as “dolphin-friendly”; that is how meaningless the term is.

Time to present the Fish4Ever mermaids pretending to be sworn in

with costumes made by

Here is the Greenpeace fish talking to fisherman, Jeremy Percy – please check out Greenpeace’s new campaign to be Be a Fisherman’s Friend.

(Yes, fishers do seem to be mostly male.).

In response to the jury’s failure to deliver an unanimous verdict in the time available, the judge acquitted the Secretary of State and ordered the prosecution to pay court costs.

I am not MEANT to know how the jury of sixth-formers voted but I do know so I am now going to tell you.

The jury at first voted 7 to 5 in favour of finding the Secretary of State Caroline Spellman guilty of ecocide.

The jury went away to try to reach an unanimous verdict. It returned a verdict even closer to a guilty charge, voting 8 to 4 in favour of finding the Secretary of State guilty.

However, the jury could not deliberate further because, unlike a real trial, we only had a day, and the day was ending.

So the defence jumped in and asked for the Secretary of State to be acquitted and costs to be awarded to the prosecution, and, wrongly – in my biased pro-fish opinion – the judge agreed.

As I could not be a mermaid that day, here is a picture of me

on Bias Lane (in Devon). Apologies for the diversion.

Whatever the outcome of the trial, it raises awareness of the Eradicating Ecocide campaign to make ecocide an international crime.

“Big ideas always start out in the margins before they spread into the mainstream. Earth law and in particular the law of Ecocide is just that – a big idea worth spreading.”