If you like chai, Hot Earth is the real thing 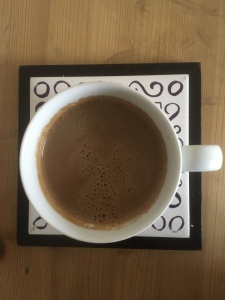 If you like real chai, you have try Hot Earth chai.

Disclaimer: I am writing this blog post fuelled by Hot Earth chai but for no other gain.

Thorsten emailed me out of the blue with his offer of chai samples. He has been developing his own chai tea blends, serving them after giving yoga workshops. It has proved so popular, he has set up a Manchester-based business.

Thorsten (above) in an Elbow Balance yoga pose.

I first tasted chai at a festival years ago but have not found a good one since. Mainly insipid tea-bags or sickly syrups.

As soon as I opened the packet, I knew from the fresh aromas I was in for a treat.

Handmade in the UK from organic and fair trade ingredients, Hot Earth is the freshest, subtly-spiced chai I have tasted.

It stimulates, refreshes, stimulates and soothes.

How do you make real chai?

Saucepan on hob with 4 teaspoons of Hot Chai per 1/2 cup of water and some chopped fresh ginger. Boil and simmer for 5 minutes. Add full-fat milk (I also used almond milk). Boil again with the milk.

This is important as this is when the flavours of the volatile oils merge with the fat of the milk. And why full-fat milk works better than skimmed milk.

Strain, sweeten if you like (Hot Earth Chai is already lightly sweetened with coconut blossom sugar), and sip.

How did Thorsten manage to get chai to taste so wonderful? After first tasting it in Switzerland, he knew that tea and coffee would never satisfy again.

He travelled in India stopping at every place that sold chai. But, disappointingly, it was usually black tea with milk and lots of sugar.

“Sometimes there was a clove or a lonely cardamom pod swimming in the tea but nothing matched the awesomeness of my first experience. I began to wonder it I had imagined it.”

“Every sip was a sip of bliss. It focussed all my senses into my taste buds – a few minutes of pure presence. I was hooked. I rented a place next to the restaurant, and had at least three cups of chai every day. The owner became a good friend and I learned how to make real chai.”

It turned out it was the owner’s mother who prepares the spice mixture by hand, and had done so weekly for 50 years.

After two weeks, Thorsten left with a bag of the mother’s spice mixture.

“Now I was able to cook my own chai, but not forever. Once the bag was empty, I would be in trouble.”

“Some were hard to find, especially without speaking Hindi. Every week I prepared a spice mixture and compared it to the one I got from my friend’s mum. I was getting close. But I still felt there was room for improvement.”

Once back in Switzerland, Thorsten found an organic spice supplier whose quality standards matched his. Then over the course of a weekend, Thorsten devoted himself to making chai.

“Equipped with weight scale and calculator, I adjusted my recipe over and over: increasing one spice and cooking a cup of chai to taste. Decreasing another spice, and trying again. Finally I achieved what I wanted. All the flavours merged to create a new one. Not one flavour stuck out or was hidden. They were rounded into one taste. I had made it: chai. The real stuff. My daily cup of meditation.”

When he moved to England, Thorsten was amazed how many places sold chai. “And guess what, they all sucked. Excuse my language, let’s say they were different.”

So he started sourcing spices again in the UK, shipping some in from Switzerland.

“I realised that everyone who drinks this liquid magic gets instantly addicted. I could not keep giving it away. So I decided to turn it into a business, and Hot Earth was born.”

I am grateful to Thorsten for his dedication to supplying real chai.

Try a free sample of Hot Earth chai and tell me if I lie.

Like Loading...
This entry was posted in food and tagged chai, fair trade, natural, organic, tea. Bookmark the permalink.

9 responses to “If you like chai, Hot Earth is the real thing”