“Some anthropologists say that sharing food is what makes us human.”

So says Jess Thompson, co-founder of Migrateful, where asylum seekers, refugees and migrants teach their traditional cuisines to the public.

Personally, I bless migration for transforming modern British eating. Can you imagine a world without pasta, curry or houmous?

She points out that the word “companion” is derived from the Spanish “con pan” meaning “with bread” – a companion is someone with whom you share your bread.

Above is a pic of the co-founders, Jess Thompson (left) and Jules Mazza-Coates whom I have known since she was little. Jules was brought up to believe the act of sharing a meal helps build human relations, and that preparing home-cooked, fresh food can be simple and cost-effective. After working with refugees in Calais refugee camp, Jules supported their integration in the UK.

Every Wednesday at the Migrateful chef training in London, the chefs – from Syria, Iran, Lebanon, Nigeria, Eritrea, Ethiopia, Ghana, Ecuador, Cuba and Pakistan – take it in turns to teach the group how to prepare their cuisine. 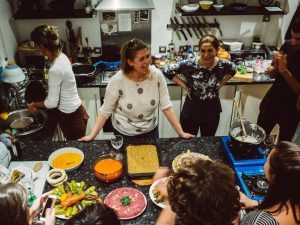 Majeda (above) leads a Syrian cookery class for the group. A mother of two, she arrived in the UK a few months ago. “I wish I were in Syria now, I know my country needs me and I miss my two boys and husband so much”.

What is her story? Majeda was working as a children’s therapist in the capital when war broke out in Syria. Thousands of Syrians fled to Damascus after their homes were bombed by the Syrian government. Majeda organised an initiative to feed her displaced countryfolk. The Syrian government imprisoned her for four months for feeding Syrians from areas under occupation.

After her release, she continued her support for the displaced Syrians. Eventually, threats from the state became too much. For the sake of her family’s safety, Majeda had to leave Syria.

At Migrateful, Majeda cooked a Syrian meal. She said:

“I believe there is a relationship between cooking and love and that preparing a meal for the one you love, combining your skills and your feelings to create something, can convey a lot to the person. I have a real passion for cooking and I think that passion is one of the things that makes me a good wife, mum and friend”.

Migrateful’s next class is a vegan Ethiopian cookery class in Brixton, London, on Monday 30 October. 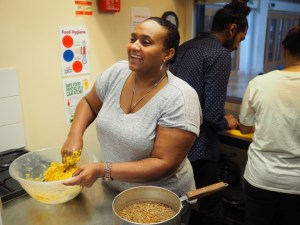 Migrateful comes to Bristol on Monday 6 November to teach Argentinian cooking with José (see pic below).

When we break bread together, we become companions.

Posted in eating well on a budget, food, health, vegan